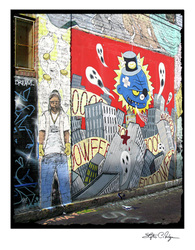 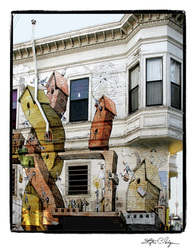 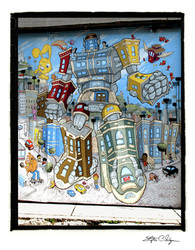 San Francisco is a virtual outdoor art gallery where city walls become artist’s canvas and the unremarkable become works of art. And it's free for all to enjoy. A walk down San Francisco city streets and alleys offers more than just pathways to local destinations. Along the walls of buildings and residential houses, more than 600 local murals filled with colorful beauty and social political narratives canvas the corner of the eye. The colorful Mission District is the capital of San Francisco murals with the greatest concentration of murals in San Francisco.

Twenty-Fourth Street - in the Mission between Potero St. and Valencia St.
24th Street has something that no other neighborhood in the city offers: an amazing array of beautiful, wellcrafted, and often thought-provoking murals depicting themes of importance to the artists and the residents of the neighborhood. There are more than 80 murals in the Mission District.

Balmy Alley - Between 24th St. and 25th St. (just south of Folsom St.)
Running straight into a park in a balmy section of San Francisco, this highly political and sometimes whimsical alley started in 1971 and fills the newly cobble-stoned street with Latino and South American murals portraying images of political strife, artistic movements and cultural heroes. Precita Eyes Mural organization, a non-profit arts organization that acts as an ambassador to Balmy alley, runs mural walking tours daily throughout the year.

Clarion Alley - One block over from 17th St. between Valencia St. and Mission St.
This subversive alley filled with contemporary-style murals started in 1992 and features one of the last murals by artist Chuy Jesús Campusano and is the acting location for the recognizably urban and graffiti aesthetic of San Francisco's New Mission School. Clarion Alley is also host to an annual block party celebrating the newest mural contributions.

Women's Building - 3543 18th St. in the Mission
Known to San Francisco locals as the "Maestrapeace," this four-story mural titled "Women's Wisdom Through Time" is the vivid result of a yearlong collaboration between seven women artists back in 1971. This monumentally colorful project wraps around the entire building of this multi-service center for women and girls. The mural features narratives of feminine independence and strength, including depictions of famous women including Georgia O'Keefe and lesbian activist of color, Audre Lorde.Diego Rivera Murals.

Coit Tower - 1 Telegraph Hill Blvd.
One of the oldest San Francisco landmarks and the largest public work of its time, this government-sponsored fresco took 25 artists and a year to complete. Finished in 1934, this future aesthetic example of New Deal Idealism features agriculture, education, urban and rural life in California after World War II.

San Francisco City College - Ocean Avenue campus in the Diego Rivera Theater
Another notable Diego Rivera mural (and some say the most important work of its time) is the Pan-American Unity mural located at San Francisco City College's main campus. Commissioned in 1940 for the Golden Gate International Exhibit and then moved to its now permanent location in the Diego Rivera Theater in the 1961, this 22 by 74-foot masterpiece is based on the marriage of North and South American artistic expression. 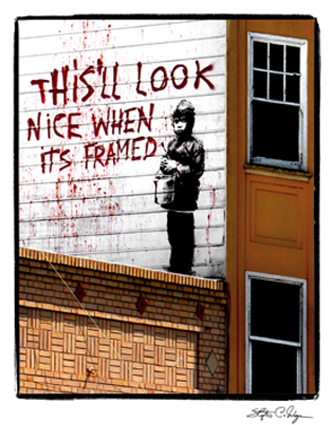